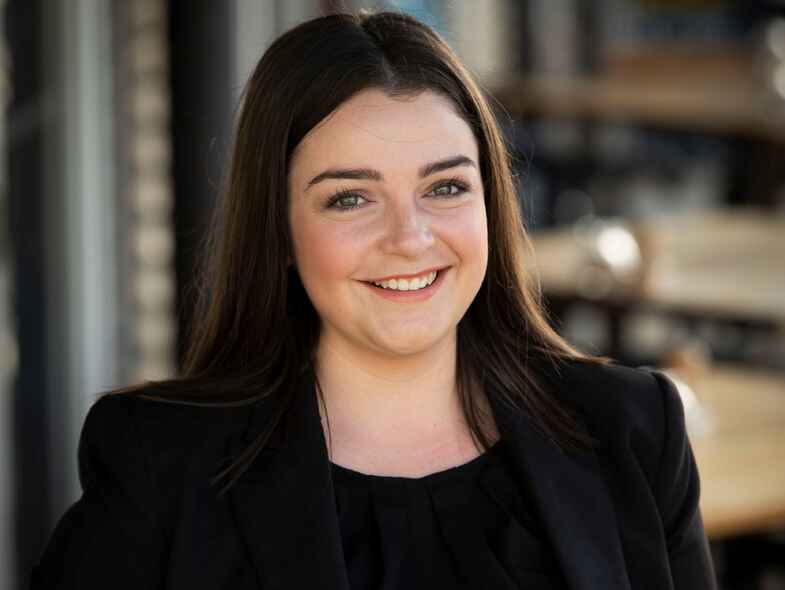 Auction Champion is not a title Jenna imagined when she began her journey in real estate but that is exactly where she has found herself. Jenna joined Peter Blackshaw Manuka in 2014 as a personal assistant to one of the agents. At the time it was just a job for Jenna who planned to work for one year and then study nursing.

“At the time it was just a job”, she says. “The original plan was to take a year to get started in the workforce and then do nursing”. But although Jenna did begin her nursing degree, she found herself drawn back to real estate instead. “Turns out that I liked it!”.

Although Jenna was employed as an assistant, she benefited from Peter Blackshaw’s commitment to developing its staff into winners. The agent she worked for gave her the opportunity to develop her skills. “I used to go out on appraisals and open houses as well as doing the admin tasks”, she explains. “She saw my potential, and I was willing to go that extra mile”.

That’s not unusual for Peter Blackshaw agents, who are very proactive in developing new staff. Jenna remembers her team speaking to her about a possible restructure of the administration section so that they could give her the right opportunities for her skills. She knew she wanted to gain experience as an agent and auctioneer, and they were behind her all the way.

“I did formal training to get my certificate of registration as an agent”, Jenna explains. “And after that, it was all systems go!” Alec Brown (pictured right) is a great mentor to Jenna.

“He was supportive of my goals”, says Jenna. “He’s been training me since then. We practice a couple of times a week. It’s been lucky that I work in an office with someone who’s so good at what they do”.

When she’s running her own auctions, Jenna draws on that training as well as her experience as a drama student and school debate team member. “Sometimes it’s about giving people a show until the negotiations start. I can spend ten minutes talking about nothing to keep people entertained!”.

Her main challenge is thinking on her feet. “You’ve got to think about what’s happening next, and what’s the most beneficial thing for the client. You can do all the preparation possible for an auction but sometimes something happens that you could never expect. As an auctioneer, you need to know how to handle that”

Peter Blackshaw is known for its commitment to breaking gender stereotypes, and Jenna has found the team to be nothing but supportive. “I’m the only female auctioneer at Peter Blackshaw. There are only a few of us in Canberra at all, in fact. But I haven’t found it harder. Everyone’s been super supportive, and I’m just one of the boys”.

In fact, she says, a few clients have specifically asked for a female auctioneer. Jenna is running a charity auction later in the month in response to one such request and is looking forward to representing Peter Blackshaw and all women in her network.

Jenna’s also clear that her training as an auctioneer has helped her skills as an agent. “I feel a lot more comfortable when I’m helping buyers because I’ve been on both sides and I understand the whole process”, she says. “I can say ‘as an auctioneer, this is what I think you should do’ and that’s really helped”.

So what’s next for Jenna? A lot more training, and a lot more competition. She’s competing in the REIACT Awards for Excellence in August and hoping to take out the winning spot. “I want to become one of the best so I can get more business and help my clients get the best result”.

Her team is behind her all the way.

To find out more about Jenna’s journey, click here. If you’re interested in working for Peter Blackshaw, explore our opportunities here.

About Us
Who we are
Join the team
Franchise options